The availability of third-party cookies has been declining for over a decade.

The first phase started when ad blockers (browser plugins) were introduced in the mid-2000s. More recently, the decline of third-party cookies has been accelerated by privacy laws like GDPR and privacy settings in web browsers — Safari and Firefox block third-party cookies by default. And now, Google is getting into the cookieless conversation with its announcement that it will phase out cookies.

While the cookie has been on the decline, in the short-term there will be minimal impact on digital marketing. Long term, there is now a need for the entire digital community at all levels to find solutions that allow the same (or similar) levels of personalization and targeting that third-party cookies have been providing, while also addressing concerns and the new mandatory practices around privacy, transparency and data ethics. 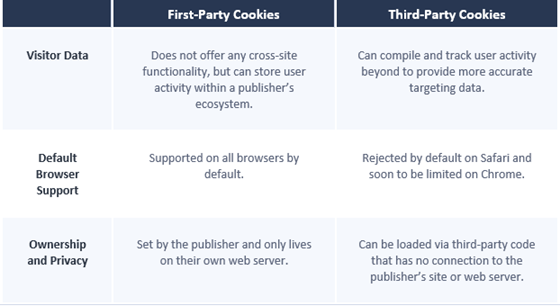 Google stated in January 2020 that it’s planning to end support for third-party tracking cookies in its popular Chrome browser “within two years.” The majority of internet users (63%) access the internet with Google Chrome.

The alternative to third-party cookies that Chrome is proposing is called Privacy Sandbox. Although details have not completely been worked out, Chrome’s Privacy Sandbox will execute advertising processes in a restricted environment as first announced on August 22, 2019.

Google’s goal is to provide an environment for advertising that doesn’t rely on 1:1 identification.

“As that functionality becomes available we will place more and more restrictions on the use of third-party cookies, which are the most common mechanism for cross-site tracking today and eventually deprecate them entirely. In parallel to that we will aggressively combat the current techniques for non-cookie based cross-site tracking, such as fingerprinting, cache inspection, link decoration, network tracking and Personally Identifying Information (PII) joins.” ~ Google Announcement

Currently, none of the proposed Privacy Sandbox APIs are currently open for marketers and third-party tech vendors to test, and their release schedule has not been announced by Google.

In the interests of privacy, the Apple Safari and Mozilla Firefox web browsers are able to block third-party cookies by preventing them from being stored in the browser, and, to close the use of cookies by advertisers. Apple’s ITP2 in Safari takes it a step further by cutting the first-party cookie lifespan from seven days to one day. These blockers are active by default in both Safari and Firefox.

Core capabilities of advertising that would be impacted by the removal of third-party cookies:

Note: These are potential impacts based on their reliance on third-party cookies. Proposals for future pathways have been laid out but still unvalidated. Many are both likely to survive in some form.

Currently, ‘Walled Gardens’ like Google and Facebook have the advantage of using deterministic data, e.g. login data tied to people-based IDs. There are a handful of ID solutions that use probabilistic data and compete with the ‘Walled Gardens.'

Google’s ad revenue is partially dependent on third-party cookies, but it also collects a lot of first-party data on internet users through its many services, such as Gmail, Maps, YouTube, Android, Google Home, and even its search bar, they suddenly become the only option for many advertisers. Eliminating third-party cookies increases Facebook’s and Google’s ability to track consumers and gather enormous amounts of data about consumers while also preventing many of their competitors from doing the same.

While Google’s stated goal is to make the web more private and secure for users this move also strengthens their ‘Walled Garden.’

The Trade Desk's Unified ID is a standardized identifier for locating someone visiting a webpage that links to an encrypted email address collected by publishers. The open-source technology is designed to enable publishers to correlate user data with Web pages and other content while retaining user privacy, and is the second iteration of Trade Desk’s Unified ID.

One main strength of TTD’s Unified ID and the Advertising ID Consortium is that they have a number of large AdTech players as members, meaning better compatibility and match rates between platforms.

Fingerprinting is a methodology for probabilistically identifying a user without cookies by combining a series of signals that, when combined, are likely to identify a unique user and assign that user a hashed user ID. These non-cookie signals are things like device, operating system, browser, IP address, time zone, and language settings

Because this tracking isn’t cookie-based, many ad tech companies went all-in on fingerprinting as a solution to cookie death. It’s easy to find ad tech providers that will allow you to target with fingerprinting, and with generally good results compared to cookie-based targeting.

However, given the larger trends in privacy, such as GDPR and CCPA, it’s probable that fingerprinting will go the way of the cookie. And probably sooner, rather than later: trends indicate that the number of new companies coming out with these types of targeting models are on the decline. As noted above, Google has already stated that they “will aggressively combat the current techniques for non-cookie based cross-site tracking, such as fingerprinting” etc.

These are places where the giants like Amazon, Facebook, and Google share aggregated customer data with advertisers (usually via neutral third parties), allowing them to blend their first-party data with the aggregated customer data for a rich view of their ad targeting—which in turn allows them to see where users may be getting over or underserved, and to take those insights back for future planning.

Though advertisers can access the data, that data can never leave the room. So, though the insights are there to be had, an advertiser can never make use of any actual data for future advertising campaigns outside of the ‘Walled Garden’. That fact, combined with the significant cost, is likely why adoption has been low and is primarily being leveraged by large advertisers such as Proctor & Gamble.

While cookie deprecation is on its way, there are still many ways to efficiently reach users while many of the above solutions are more thoroughly developed.

Retargeting and conversion tracking could be impacted in a cookieless world. More likely than not Google will have solutions before they move to cookie-deletion as there is too much ad revenue on the line to not make changes.

HOW USIM IS HELPING COMPANIES PREPARE

HOW COMPANIES CAN PREPARE